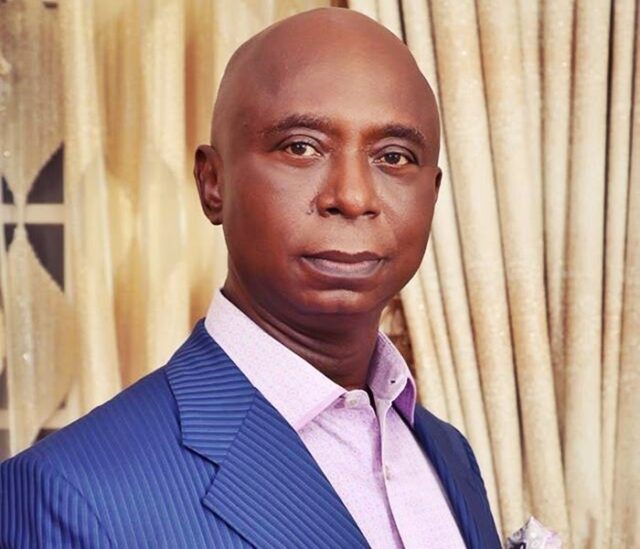 He’s considered to be one of the most successful Nigerian businessmen of all time.

Even as a Prince from a wealthy family, Ned Nwoko still works hard to become somebody better while dragging others around him along.

He became more prominent after he married popular Nigerian actress, Regina Daniels when she was only a teenager.

Ned Nwoko is a prince born with a silver spoon to the royal family of Nwoko in the village of Idumeje Ugboko, Aniocha North Local Government Area, Delta State Nigeria.

He was born on 21 December 1960 with the full name Prince Chinedu Ned Munir Nwoko.

He grew up in his village as one of the princes of Idumeje Ugboko, Aniocha North Local Government Area, Delta State Nigeria.

Then relocated to the UK to study.

Ned Nwoko started his education in Nigeria, then transferred to the United Kingdom to pursue a bachelor’s degree in Law and History at the prestigious University of Keele, located in Staffordshire in the United Kingdom.

After graduation and consequently obtaining his first degree, Ned Nwoko moved to Kings College, London, where he secured an LLM in Maritime and Commercial Law.

He was subsequently called to the English bar at Lincoln’s Inn.

He was recognized by the Commonwealth University College in Belize, United Kingdom, where he was rewarded with an honorary Doctorate Degree in Law.

He also got another honorary degree, this time in science, from the prestigious Federal University of Petroleum Resources Effurun (FUPRE), Delta state.

After acquiring all necessary certifications, Ned formed and maintained one of the best law firms in the United Kingdom.

According to Ned Nwoko, he practised as a solicitor of the Supreme Court of England and Wales. However, there are no official records according to the investigation. Ned is not available on the database as a registered solicitor in the UK.

However, it can be authoritatively confirmed that he was secretary-general of Nigerian legal practitioner in the UK and was a visiting adviser of citizens’ advice bureau based in London, England.

Ned Nwoko made a sensational return to his country of birth Nigeria in December 1998, with a mission aimed at the enthronement of a viable democratic institution in Nigeria following the disengagement of the military from power after decades of military dictatorship.

Ned Nwoko is also a philanthropist with a foundation contributing to the empowerment and education of youths in Delta state. He even donated $273,000 (N100 million) in 2019 for the rehabilitation of a failed construction of the road linking Southeastern Nigeria to Abuja, the nation’s capital, and in the same year, he pledged the sum of $200,000 (N71.6 million) to UNESCO for the support and development of sports in West Africa.

Ned Nwoko‘s achievements and good works have not been overlooked by concerned people. On the contrary, his prominence and good deeds have earned him several awards on different occasions. Some of which include:

Ned Nwoko is a busy man but spares out some time to connect with his followers on social media.

His involvement in social media activities is partly influenced by his junior wife, Regina Daniels, who herself is a social media freak.

You can connect with Ned on the following handles:

Ned Nwoko, as a Muslim, gave him the right to marry more than one wife. The billionaire has 6 wives and several children.

The philanthropist lost his first son Tarik Nwoko whose mother is from Morocco. The young man died at the ripe age of 22 in his sleep in the early hours of 8 December 2014.

Before his death, he was a law student at North Staffordshire University in the United Kingdom.

His wives also include the popular Nollywood actress, Regina Fatima Daniels who stands as one of the most sought-after, influential and successful actress/film producers in Nigeria.

Ned Nwoko controversially married Regina Daniels when she was only 18. She now has a son for him, born on June 29, 2020.

He has another wife named Laila Charani and four others.

Ned Nwoko amasses money from his chains of businesses, local and international. He has investments in Nigeria and abroad, including – Oil, Real estate, tourism, agriculture, and arts.

All these ventures have made him one of the richest men in Nigeria, with a net worth estimated to be an astronomical $1.2 billion.

He also acquired income while he served beloved country Nigeria as a politician and received royalties from being a bonified member of the Nwoko family in the community of Idumeje Ugboko, in Delta State.

The easterner, Ned Nwoko owns several houses in Nigeria and dozens of expensive cars. The biggest property of which is a private jet worth $54 million which when converted to Nigerian currency is N20,7749,425,000.