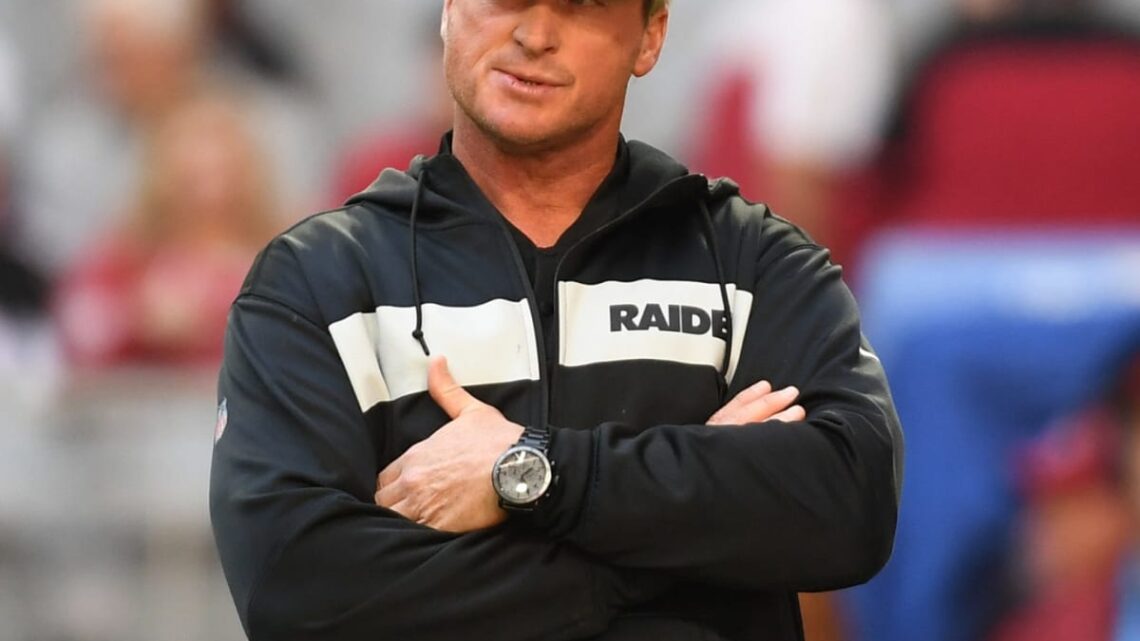 He is a sportsperson who has worked with several top teams, such as Green Bay Packers, Philadelphia Eagles, and Las Vegas Raiders.

He worked briefly as a sports analyst for ESPN.

Jon Gruden was born on August 17, 1963, into a Slovene-American household in Sandusky, Ohio. His father, Jim Gruden, worked for the Tampa Bay Buccaneers as a quarterbacks coach, national scout, and director of player personnel.

His nephews are Jack Gruden, J. J. Gruden, and Joey Gruden, while his mother is named Kathy Gruden.

Jay Gruden, his brother, worked briefly as the head coach of the Washington Redskins while playing and coaching for the Tampa Bay Storm and Orlando Predators in the Arena Football League. James Gruden, Jon Gruden‘s younger sibling, practices radiology at Weill Cornell Medicine.

After receiving his degree from the University of Dayton, Jon Gruden was hired as a graduate assistant coach at the University of Tennessee for the 1985 season. Following his volunteer tenure, he worked for Southeast Missouri State for two years as the quarterbacks’ coach.

After that, he relocated to the University of the Pacific in 1989, where he served as the tight ends coach’s offensive assistant. Jon Gruden worked as a graduate assistant coach for Walt Harris, the offensive coordinator at Tennessee, before being hired at Pacific.

While serving under quarterbacks coach Mike Holmgren, Jon Gruden worked as a special assistant with the San Francisco 49ers in 1990. In March, he joined the University of Pittsburgh‘s staff as wide receivers coach under head coach Paul Hackett.

At the age of 28, Mike Holmgren, Jon Gruden‘s former employer at the San Francisco 49ers, hired him to work for the Green Bay Packers as a special offensive assistant and wide receivers coach in January 1992. After three seasons in Green Bay, he joined the Philadelphia Eagles as their offensive coordinator, working with Ray Rhodes, a former Packers assistant coach.

Al Davis, the Oakland Raiders owner, and general manager, then decided to hire Jon Gruden as the team’s new head coach for the 1998 campaign. He coached several clubs for the next ten years before retiring.

Jon Gruden replaced Tony Kornheiser as the color analyst on ESPN’s Monday Night Football broadcasts in 2009. Additionally, Jon Gruden provided analysis for ESPN’s broadcast of the NFL Draft and college football playoff games. After working as an analyst for the next ten years, he came out of retirement to coach Las Vegas Raiders from 2018 to 2021

Jon Gruden first met his wife, Cindy Gruden, in 1985, when she was a student at the University of Tennessee and he was working as a graduate assistant.

Three sons were born to them after their 1991 wedding. His children are Deuce Gruden, Jayson Gruden, and Michael Gruden.

As a popular American sports figure, Jon Gruden has been embroiled in several controversies, with the most recent occurring in 2018, after taking over as the Raiders’ head coach once more,

Jon Gruden had written and sent several racists, sexist, and homophobic emails between 2011 and 2018. He served as the team’s head coach until his departure during the 2021 season. He was consequently expelled from the Buccaneers’ Ring of Honor by Tampa Bay.