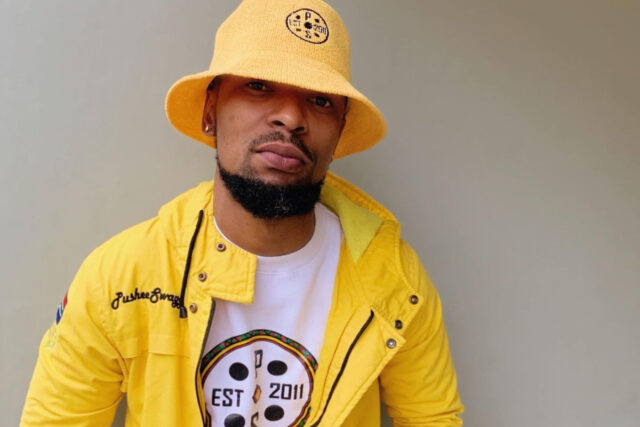 Sthembiso Khoza (born July 1, 1986), who is famous as SK Khoza, is a South Africa actor, MC and voice-over artist.

He is famous for the role he plays as Shaka in the Mzansi Magic soapie drama, The Queen.

He is loved on the television screen across the South African nation.

His father, Stan Khoza, is the Independent Municipal and Allied Trade Union national president, and his mother is Lindiwe Khoza.

His parents are pretty popular in the country. His brother, Abdul Khoza, is also a famous actor in South Africa who is widely known for playing the role of Qaphela in the Mzansi Magic soapie drama, Isibaya.

Sthembiso ‘SK’ Khoza was raised and schooled in KZN, and with the influence of his parents, he was able to kick start his career at ease.

Sthembiso ‘SK’ Khoza had his primary education in KwaZulu-Natal, where he studied at Parkhill High School and completed his secondary studies. He also graduated from the University of Johannesburg with a Degree in Sports Management.

It will be instructive to note that the gifted actor, Sthembiso ‘SK’ Khoza didn’t start his career as an actor. Instead, after obtaining a degree in sport management, he started his working career at Supersport as a log editor.

With the expertise he showed during the auditions for a Channel O show, the channel decided to make him the newest member of the Channel O family and host of Mzanzi Ridez, a car customisation and hip hop magazine show similar to MTV’s Pimp My Ride.

The show’s success led Sthembiso ‘SK’ Khoza to be used as a field presenter for Vuzu’s V-Entertainment magazine show. He was also a radio host at TransAfrica radio, a voice-over artist and MC.

After globetrotting his way to profiling international football stars for Goal Diggers, Sthembiso ‘SK’ Khoza returned to add acting to his list of talents, joining the telenovela, iNkaba on Mzansi Magic.

He started acting in 2013, and since then, he has been featured in a lot of drama and serials.

The multi-talented actor, Sthembiso ‘SK’ Khoza is on Instagram with over 800K followers.

Sthembiso ‘SK’ Khoza is in a relationship with the actress, Pabee Moganedi. He made this known through a public display of affection post on Instagram, where he shared a heartfelt post to his girlfriend expressing his love for her.

He divorced his wife some years ago after some unsettled misunderstanding between them.

He also has a son with Lee-Anne Makopo, who is Lelo Khoza’s mother. Sthembiso ‘SK’ Khoza live in South Africa with his family.

The celebrated and talented South African ator, Sthembiso ‘SK’ Khoza net worth is valued at $500,000 – $1 Million.