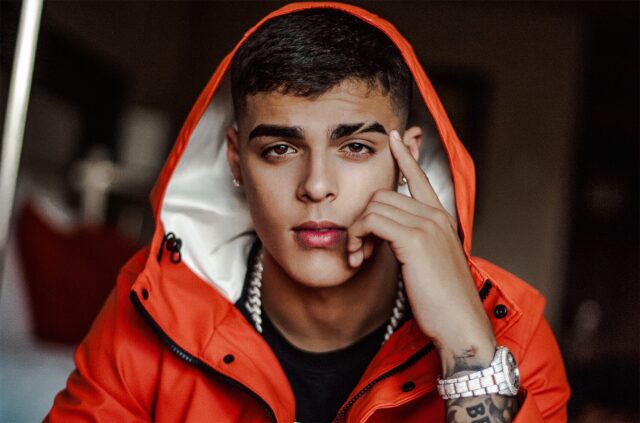 The rapper and singer came into the limelight following the release of his songs; A Solas, Luz Apaga, Soltera, and Soltera Remix, which he featured Latin trap and reggaeton star, Bad Bunny and the “King of Reggaeton” himself Daddy Yankee.

The year 2019 saw the release of his debut album “Epico“, which was put out on October 25th.

Lunay was born to a mother named Jennifer Osorio and a father named Maximo Osorio. He was born and raised in the Corozal of Puerto Rico.

He came from a family of four children along with his elder brother named Jeimax Osorio.

Growing up, he had shown interest in football and later drums. Still, he redirected his energy to music, having been inspired by the success of other artists in the industry, particularly in Latin America.

He started a consistent freestyle series at the age of 12, which he made public through the social media platform Facebook.

However, he leveraged upon his soccer teammates to create contents that went viral catching the attention of renowned producers like Chris Jeday and songwriter Gaby Music.

Lunay‘s childhood experience was not all rosy, owning to his parents’ separation when he was only six (6) years old. Which even gave rise to his two half-sisters named Jeimaris Nicole and Kate Osorio.

Having had a successful music career, not much has happened in his education career. But Lunay attended a local High school called Escuela Superior Emilo R. Delgado.

Lunay made his initial entries into the music industry in 2017, when he started uploading clips and snippets to SoundCloud under his first name, “Jefnier“.

Also, in the same year, he put out “Aparentas“, reaching thousands of responses on the platform, which drew the attention of the two most renowned producers in the country; Chris Jeday and Gaby Music. As a result, he signed a record deal with them and later, in May 2018, replaced his stage name Jefnier with Lunay.

In the same month, he released his song “So The Vas Conmigo“, which later became a massive hit, and he continued to drop songs until the release of his first studio album named “Epico” in 2019. He has been linked to artists like Lil Pump, J Balvin etc.

Lunay has a solid fanbase over different social media platforms with verified accounts. He has an astonishing number of 1.9 million followers under his name on Facebook.

In addition, he holds a verified Tiktok account under his name with an incredible number of 2.8 million followers and 10 million likes.

Lunay‘s personal life has been private over the years. He has no verified date and is not yet married.

There are no records of child/children to his name even though in the presence of rumours suggesting his affairs with his co-artists, who are females.

The singer, Lunay has an estimated net worth of around $1.5 million. However, his primary source of energy income comes mainly from his music, both released tracks and shows.

Lunay has many musical projects to his name, including two (2) studio albums and three (3) EPs.

In addition, he records 12 singles as a lead artist and three songs as a featured act with numerous appearances in Top music charts in the US and Latin American countries.