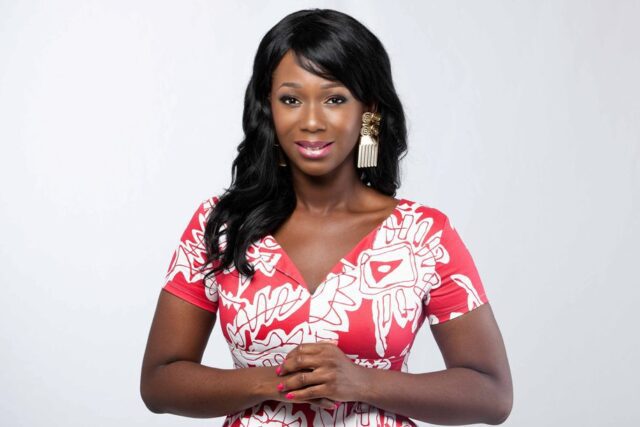 In 2011, she created a portfolio for herself by winning the Best Actress in a Leading Role at the AMAA Awards for her stellar performance in a film titled Sinking Sands.

Other film credits of this sensational actress include Azali, a film which holds the record of Ghana’s first-ever selection for the Oscars, and a 2015 Netflix movie titled Beasts of No Nation.

Ama K. Abebrese is an accomplished television presenter with over two decades of experience. She started her TV presenting career at the YCTV in London in her teens. So far, the Ghanian has presented on OBE TV, BBC2, Viasat 1, Ebonylife TV, TV3, and other top channels.

Ama K. Abebrese was born in Kumasi, Ghana, on 3 May 1980, but was raised in West London, United Kingdom.

Her parents originate from the Akan tribe in Ghana, West Africa.

In addition, she holds a Bachelor of Arts in Media Arts and Drama, which she successfully obtained at Saint Mary’s University, Twickenham.

Ama K. Abebrese started her career training at YCTV (Youth Culture Television) in London, which is an organization launched by Sabrina Guinness on a TV show called Challenge Anneka.

She worked as a presenter on a BBC2 youth show titled Pass da Mic and as a guest presenter on an English File educational series. More so, she became interested in acting after joining the Lyric Theatre (Hammersmith) Summer Company as a youth.

Ama K. Abebrese served as a regular TV presenter on the now-defunct OBE TV in London, hosting and producing a number of shows such as One Touch and an entertainment chat show called On The Sofa, where guests she has interviewed range from Ziggy Marley to Akon.

She has also interviewed the likes of Ne-Yo, Harrison Ford, Rihanna, and Star Wars director George Lucas among other notable celebs.

She’s also acted in other top films such as the Revele film titled Elmina and London Get Problem. She also starred and co-produced a movie titled Double-Cross, which won two awards for “Best Cinematography” and “Best Hair and Makeup” at the 2015 Ghana Movie Awards.

Ama K. Abebrese is the former Head of Own Productions and Executive Producer at the renowned Viasat 1 television station in Ghana. She was also the host of a programme called “A Day“, in the Life TV show, which aired on Viasat 1. During the same period, she co-hosted a show called New Day on TV3 on weekday mornings.

In 2013, Ama K. Abebrese, alongside Nollywood actress Dakore Akande and comedian Ayo Makun hosted the 2013 edition of the AMAA Awards.

Concurrently, she was named among C Hub magazine’s 100 most influential ‘African Women Influencers’ of the era for 2014/15.

Additionally, she was ranked the Number 1 Most Influential TV and Radio Host in 2015 on the Ghana Social Media Rankings List.

Ama K. Abebrese is one of the most decorated Ghanian celebrities. Most of her awards are well deserved as a testimony of her great works. Some of Ama K. Abebrese‘s awards and recognitions include:

Ama K. Abebrese‘s also received some notable nominations, such as;

Ama K. Abebrese is very popular among Ghanaian TV viewers in some parts of Nigeria and the UK. Her popularity has given her much-needed attention, thus increasing the number of followers on her social media accounts.

Ama K. Abebrese‘s marital life is quite complicated. It is unknown if the Ghanian star is married or not. Although, several publications have it that she is a mother of two. She hasn’t revealed her husband, boyfriend or baby father to the media.

She strives to keep her personal life away from the media and public attention. Hence we cannot confirm her relationship status. However, this page will be updated as soon as credible news regarding this issue pops up.

In 2014, Ama K. Abebrese was unveiled as the brand ambassador for Dark and Lovely in Ghana.

She lives as one of the most influential Ghanaian actresses with an estimated net worth of US$500,000.