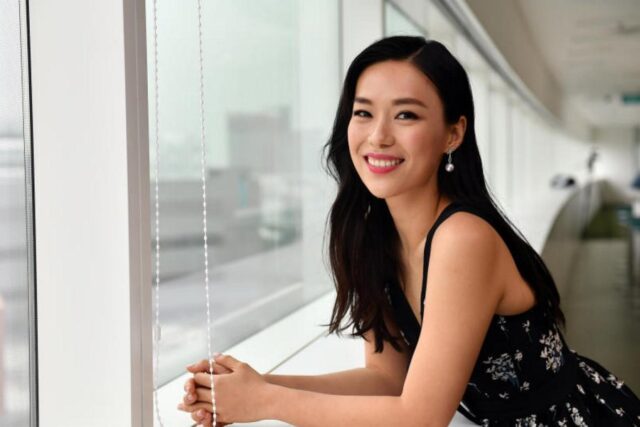 Rebecca Lim (born September 26, 1986) is a talented Singaporean actress and television personality. She is the personality who is best known for her roles in the television dramas The Dream Makers and The Unusual Pair. She has also appeared in films such as I Not Stupid Too and 881.

She began her acting career in 2006 and has since worked consistently in television and film. She is a versatile actress who is known for her natural and effortless performances.

In 2013, Rebecca Lim won the Best Actress award at the Asian Television Awards for her role in The Dream Makers. She is also a two-time recipient of the Star Award for Best Newcomer.

Rebecca Lim was born on 26 September 1986 and is the second among three children in a Hokkien family. She has a sister named Melissa Kim and a brother called Daniel Lim.

She received her early childhood, elementary, and secondary education at CHIJ Saint Nicholas Girls’ School. She then attended Victoria Junior College and Singapore Management University (SMU) for her higher education.

Rebecca Lim competed in the Miss Singapore Universe competition while pursuing a dual degree at Singapore Management University in accounting and law. During her school days, she was active in theatre and was a member of the school choir. She was also a regular host of school events.

On 15 November 2021, Rebecca Lim announced her engagement to Matthew Webster, an assistant vice president with PSA International. The couple met while working at the Singapore-based port operator and have been dating for years.

The news of her engagement has been widely reported in the Singapore media, with many people congratulating the couple on their happy news. No reports about her children at the moment.

The Truth, a 2008 drama in which Rebecca Lim co-starred with Tay Ping Hui and Joanne Peh, gave her her first main role. She faced criticism for how she spoke Chinese.

In the 2009 movie Fighting Spiders, she played the prostitute Susie Woon. Her performance was well-received. For the drama’s second season, which debuted in 2010, she has given the Actress of the Year award at the 2010 ELLE Singapore Awards.

In 2010, Rebecca Lim played Wendy Lim, a trainee attorney at Roberts & Fongs, in the award-winning Channel 5 legal drama The Pupil. She won the Best Actress in a Leading Role prize at the 2010 Asian Television Awards for her work in The Pupil.

Rebecca Lim‘s breakthrough Mandarin role came in 2012 when she played a psychotherapist in the Channel 8 drama Unriddle 2. At the annual Star Awards 2012, her performance won her a spot in the Top 10 Most Popular Female Artists list. This was her first nomination and, consequently, her first win in the category.

Rebecca Lim‘s gathered net worth is estimated to be US$10 million. She has earned wealth through her successful acting, modeling, and hosting career.