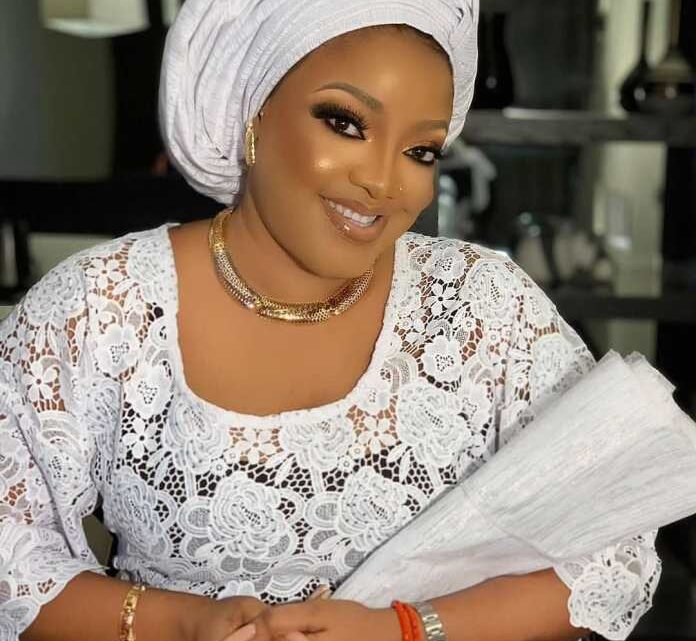 She is also a fashion entrepreneur, brand ambassador, influencer, and philanthropist who has won numerous awards.

Tayo Sobola was born into the late Mr. and Mrs. Sobola‘s family. Although their parents are both late, she was brought up by a Christian father and a Muslim mom. She was born on the 28th of December in 1985 in Ogun State, Nigeria.

She was also raised in a polygamous household. Prince Sobola is her younger sibling, whom people believe is Sotayo Sobola‘s twin due to their striking resemblance. Her mother’s name is Alhaja Bakare.

The actress also revealed that, aside from God, her mother is the most important person in her life, claiming that her strictness pushed her to be disciplined and focused.

Tayo Sobola also believes that her mother’s strictness with her as a child shaped her into a better adult.

Tayo Sobola is a married woman. The actress shared wedding photos and videos to commemorate her marriage to her spouse, although she didn’t show her husband’s photo for his privacy. She is married to Kayode Peters.

Sotayo Sobola has a lovely tattoo on her left hand and leg, but the actress has not revealed what the tattoos symbolize. She was once rumored to be dating MC Oluomo. She has no child.

Sotayo Sobola went to Lagos State for her primary and secondary studies. She obtained a Diploma in Law from Lagos State University.

After finishing her basic and secondary school education, she went to Olabisi Onabanjo University to obtain a Bachelor’s degree in Public Administration.

Tayo Sobola has stayed active and relevant in the film industry since graduation.

Sotayo Sobola began her career as a model in the entertainment sector. She has also worked as a broadcaster and in music videos. She finally settled down to start performing in English films before moving on to Yoruba films, but she currently works in both genres.

Tayo Sobola stated that because she is more fluent in English, she appears more in English Nollywood films than Yoruba films.

Since her debut, she has been in many films. Moremi, Corper Jide, Idakeji Ife, Egan, Bella, and Arewa Onijogbon are just a few of her films. She is also a film producer who has produced some hit films such as Moremi and Corper Jide.

Sotayo Sobola just released the film Corper Jide, which received rave reviews. Surprisingly, the actress admitted that her experience with sexual harassment was the catalyst for her producing the film. She described the film as one of her most challenging to date, in which she played an unusual role. She had to change almost everything to get a good result.

Tayo Sobola is a business owner. Clean Stitches, a clothing company she founded in 2018, is her baby. She also sells cosmetics and has an online store where she sells her wares. Lip Stain, a unique lipstick tint, is one of her most popular products.

Sotayo Sobola is active on Instagram and Twitter. She has a large fanbase, and her handle is @SotayoSobola.

Benefits of promoting sports events to your social media following