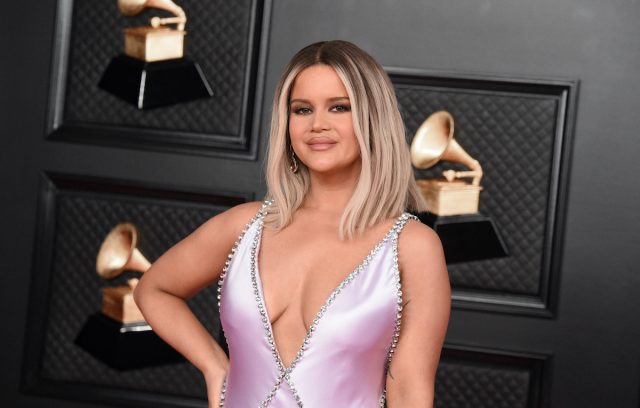 She is also a highly successful songwriter and creative record producer. She began music professionally in 2005 when she released her debut album, Walk On.

However, she became an international star after the release of her EP, Maren Morris.

The project was so successful that it topped two Billboard Charts and paved the way for the highly acclaimed country album, Hero, released in 2016.

She earned four nominations at the Grammy Awards in 2017 and won the Favorite Female Artist (Country) category at the 2019 American Music Awards.

Maren Morris is a fully bred Texas girl as she was born in the South Central state on the 10th of April 1990. Her parents are Mr. Gregory Morris and Mrs. Kellie Morris. She was raised in Arlington City as the only child of the Morris family.

Her childhood revolved around going to school, returning back to her parents’ hair saloon, and going home. Most of her time was spent at the saloon. She began towing the path of music after her father bought her a guitar at the age of twelve.

Though she received lessons from some other experienced guitarists, she became a skilled guitarist majorly by her own effort. She would often spend her free time practicing the instrument with some of her favorite songs. As she grew older, she began composing her own songs, which she sang while playing the guitar.

Maren Morris took a liking to country music and chose to major in it and began honing her singing and songwriting talents every day. Having learned a lot with time, she decided to launch her professional music career in 2005. She recorded and released the debut studio album titled, Walk On under Mozzi Blozzi Music. She was 15 at the time of the album’s release. Her next project was the single, All That It Takes, which was well received in Texas State. She followed this up with Live Wire, released in 2011.

After the success of her album, she moved to the state of Tennessee and took up residence in Nashville city. She began building a career as a songwriter and wrote many top-charting songs for other artists.

After a four-year hiatus since her last single, Maren Morris made a comeback with the EP, Maren Morris. The five-track project was self-released on the music streaming platform, Spotify, in August 2015. To Maren‘s joy, the work was widely received and she became known internationally. The EP had over 2.5 million streams within a month. This success brought her to the attention of top music labels, who began offering her recording deals. After deliberations with her management team, she finally signed under Columbia Nashville (which is the Country Music Subdivision of Sony Music Group). The label decided to re-release the EP in November 2015.

Within few months, the EP found its way to the top of two Billboards, and its lead single, My Church, received airplay in several radio stations in North America and Europe. The EP was number one and number twenty-seven on Top HeatSeekers Chart and Country Albums charts respectively. The album was certified Gold by the RIAA, having sold 2,400 copies in the first week of its release.

Encouraged by the success the EP gave her, Maren Morris began working on another album. After spending months in the studio, she thrilled her fans with the release of Hero. The album was made available on the 3rd of June 2016. Weeks after its release, the album reached the number one position on Top Country Albums Chart and the number five position on Billboard 200 chart. As part of its success story, Hero earned four nominations at the 59th Grammy Awards. She went home with the Best Country Solo Performance award for the single, My Church.

To further promote the album, she began the Hero Tour in 2017, visiting many American cities and towns. Her strong vocals have made other musicians feature her on their projects. She appeared on Thomas Rhett’s song, Craving You, and Niall Horan’s single, Seeing Blind. Both songs were released in 2017. She has also collaborated with other artists such as Keith Urban, Taylor Swift, Vince Gill, Zedd, Grey, Brandi Carlile, Amanda Shires, and Natalie Hemby. She is one of the guest artists of Taylor Swift‘s 2021 album – Fearless.

Maren Morris organized a second-tour-themed Girl in 2019. The tour was a means of promoting her forthcoming second studio album. She has revealed that the album’s title is Girl. The tour which began on the 9th of March 2019 came to an end on the 23rd of August 2019. She planned on going on a third tour themed, RSVP: The Tour in 2021 but had to cancel the plans due to the Covid 19 pandemic.

She released The Bones, the second official single of her second studio album in 2020. The song made its way to number twelve on Billboard Hot 100 and was at the top of Country Airplay and Hot Country Songs charts.

Maren Morris is affiliated with the music group, The Highway Women. The group which is composed of four female country musicians was formed in 2019. She contributed her vocals and songwriting skill to the group’s self-titled debut album. The project was produced by ace music producer, Dave Cobb and released under Elektra Records.

Since Maren Morris‘ breakthrough in 2015, her works have been nominated for the Academy Of Country Music Awards every year. So far, she has earned sixteen nominations at the award.

Her singles My Church and 80s Mercedes won her two awards at the 2017 BMI Country Awards.

The 32-year-old Texan, Maren Morris is a Christian. She is happily married to Ryan Hurd, who is also a country singer. The couple had met each other in 2013 and struck up a close friendship within weeks. They began dating a few months after. Ryan Hurd proposed to her in 2017. They chose to seal their union in a private wedding ceremony on the 24th of March 2018.

Two years after their marriage, Maren Morris conceived and gave birth to her first child named, Hayes Andrew Hurd. Hayes was born on the 23rd of March 2020, a day before her wedding anniversary.

The couple resides in a spacious and beautiful duplex in Nashville, Tennessee. When she is not on tour, she spends her time creating music or with her family. She has a studio inside her house.

Asides from the fame that her music career has brought her, Maren Morris has been able to build a sizable fortune for herself. She earns quite a lot of royalties from her released projects.

At the moment, Maren Morris is estimated to be handling a net worth of 5-10 million USD.