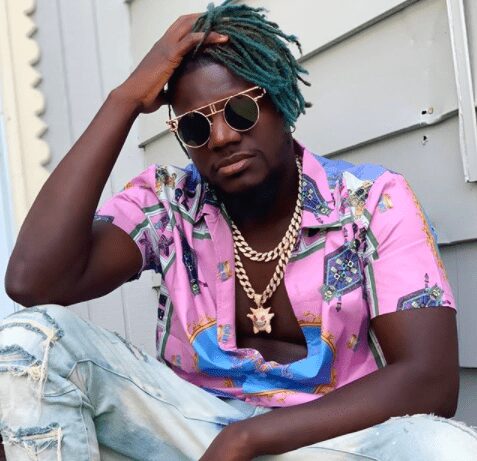 The talented 35-year-old singer is a songwriter, rapper, and radio presenter.

His hit single, How Market is much appreciated on the Ghanaian soil.

Pope Skinny was born in Amanokrom Akuapem, Eastern Region Of Ghana in 1987. He comes from the family of Mr. William Akonnor and Mrs. Susan Ohene Darko.

He was raised in Accra, the capital city of Ghana. Both of his parents are Ghanaians.

His interest in music developed from a very young age and was known for always rapping in front of his mirror or inside the bathroom as a kid.

He came up with the stage name Pope Skinny while in secondary school.

Pope Skinny‘s music career can be traced back to his days as a Junior Secondary School Student. Having discovered his talent, he started performing in shows such as Kidafest and Fun World.

When he entered senior secondary school, he formed a rap group with two of his colleagues: King Palma and Abortion. The group was called Kokrokoo.

The group didn’t last for long and split a year after it was formed. Before leaving high school, Pope Skinny founded another group called Nsoi. The group was set up in collaboration with another rapper, Shankoma.

By this time, Pope started rapping in his own dialect, Akuapem. He was the first rapper in Ghana to rap in Akuapem.

The group went on to win the FIESTA competition in 2001. While in high school, he was featured in Abortion‘s (his ex-group mate) album. The project was titled Sikilitele.

After graduating from high school, Pope dropped his debut album, Mri Pa which is translated as Good Time. This was in 2005.

For the project, he had collaborated with Ghanaian top artists such as Castro, Bukbak, Nkasei. The album was an instant hit as most of the singles became street anthems.

The album was released while he was signed under the record label, Prince Dave Records.

After a year of hiatus, Pope Skinny released the single Yekor Browsi which is translated as We Are Going To Browse. He had taken a break in music to mourn the death of his longtime producer and mentor, Prince Dave.

In 2009 he dropped another single, Ghanaian Girlz, featuring rapper 4×4. The song was a hit and trended for several weeks on major TV and radio stations in Ghana.

Pope Skinny is also a radio presenter. In 2010, he secured the job as the host of the popular show, Kashari Level on Adom FM.

In 2011, he released his highly anticipating second studio album, Round 2. The album is composed of twenty songs and featured collaborations from top Ghanaian musical acts. Shatta Wale is a notable example.

He boasts of over 248k followers on his page.

Pope Skinny is 35 years old. He is a Christian. He is based in Accra where he owns a beautiful apartment and drives an expensive car.

His relationship status is unknown because he is a very private person. He doesn’t post pictures of his family on social media. But he is unmarried.

He is a close friend of a leading Ghanaian artiste, Shatta Wale.