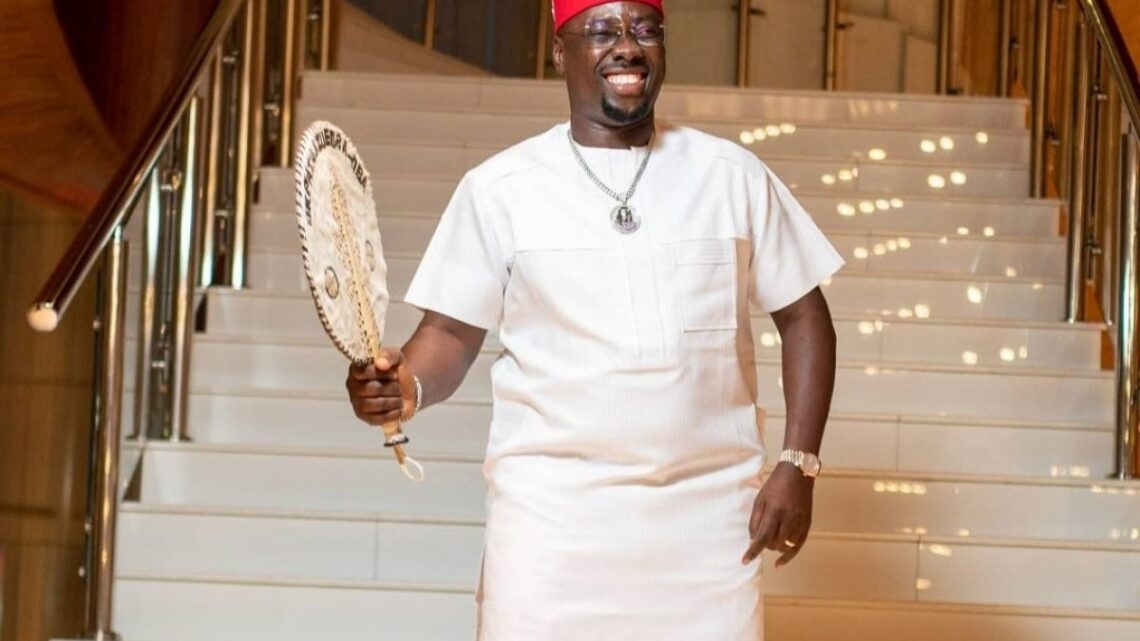 Obinna Iyeigbu (born April 12, 1975) is a Nigerian entrepreneur and socialite who is famously known by the nickname Obi Cubana.

He is the founder and chairman of the Cubana Group, one of the leading hospitality businesses in Nigeria. He has been dubbed the King Of Nightlife Entertainment due to his success in establishing thriving nightclubs.

Obi Cubana owns a chain of clubs and hotels in Lagos, South East, and Abuja. He is also the founder and CEO of the alcoholic beverage brand Odogwu Bitters.

Obinna Iyiegbu known professionally as Obi Cubana is a 47-year-old Nigerian entertainer and business mogul. He was born on April 12, 1975, in Anambra, his state of origin.

The billionaire businessman, Obi Cubana is from Oba, Idemili South; a city arranged in Anambra State. He is the Chief Executive Officer ‘President’ a famous club in Nigeria Ibiza Clu” and the administrator of Cubana Group.

He is a notable name in the Nigerian entertainment industry through his accomplishment in business and the fact that he brought out Cubana Chief Priest. He went to Central Primary School in Oba, where he grew up however continued to Dennis Memorial Grammar School in Onitsha for his auxiliary school leaving certificate.

Obi Cubana graduated with a degree in Political Science from the prestigious University Of Nigeria, Nsukka.

Obi Cubana is a member of the illustrious Iyeigbu family of Idemili Local Government Area. He was born on the 12th of April, 1975. His parents, Mr. and Mrs. Iyeigbu, named him Obinna Iyeigbu.

He is an Igbo man by tribe and native of Anambra State, in the Southeast region. His ancestral hometown is Oba.

Growing up, he was often called “Obi” by his family members and friends. From a young age, he had become involved in entrepreneurship. Obi Cubana established a couple of small businesses as a teenager, which he used to raise money to meet his personal needs.

He studied at Dennis Memorial Grammar School, Onitsha, for his secondary education.

After graduating with good grades from high school, he gained admission into the University Of Nigeria Nsukka (UNN). Obi Cubana passed out of the institution after four years of study with a Bachelor’s degree in Political Science.

As a young Igbo man, Obi Cubana was imbibed with the entrepreneurial spirit from a young age. This spirit came from watching his parents provide for him and his siblings. So, while he was an undergraduate at UNN, he combined his studies with running small businesses. This was to help him raise money to pay his bills and save money for the rainy days.

After graduating from the university, he moved to the Federal Capital Territory, Abuja, to actively pursue entrepreneurship. He launched an interior decor business and began to seek contracts. He got his major break in 1999 when a Senator contracted him to execute the interior decor of the latter’s mansion. That contract’s profit helped Obi Cubana scale up the business and invested in other businesses.

In 2006, he decided to break into a new frontier by joining the nightlife business. This led to the opening of his flagship club called Ibiza Club. The club was situated in Abuja. His experience running other businesses proved useful, and Obi Cubana grew the establishment into one of the leading clubs in the nation’s capital. Three years later, he founded another Club in Owerri, Imo State, in 2009. This time around, he named the Club Cubana.

His success in both clubs led to the founding of the Cubana Group. He serves as the Chairman and CEO of the group. The group has a chain of businesses in the nightlife, hospitality, and real estate sectors. Obi Cubana has established clubs, restaurants, and hotels across Nigeria.

Obi Cubana recently expanded to the real estate industry, where he has become a property developer. This has made him one of the leading business people in the country. Owning Cubana Group has made Obi Cubana into a billionaire and a leading socialite in Nigeria.

Obi Cubana is the co-partner of the renowned mobile brand, New Age Mobile Concepts Limited. He signed Don Jazzy as their brand ambassador in 2022.

His explanation is that he adores amusement and the way that it dials down pressure. In 2009, he had just gotten a superstar batch with his clubs and hotels found across the nation and he proceeded to set up one of Nigerian acclaimed and top club “Cubana.”

The establishment of Cubana Group became a massive business venture harboring Cubana Chief Priest as the General Manager in Cubana Conglomorate situated in Owerri. It also endorses Cubana Prime Minister as the Manager of the Group.

Today, It can be confirmed that Obi Cubana‘s business “Cubana” is established both at home and abroad with the sole aim of establishing customers satisfaction.

The King of Nightlife, Obi Cubana, is a family man. Obi Cubana is married to his heartthrob, Ebele Iyiegbu. They tied the knot in 2008.

Ebele Iyiegbu is a lawyer and humanitarian. She is the founder of the NGO KIEK Foundation. Their union has been blessed with four children.

Due to his wealth, Obi Cubana has luxurious properties across the world. When he is not busy with the day-to-day operations of his business, he spends his time with his family or vacations at different destination cities in the world.

He is a close friend and business partner of Cubana Chief Priest. The latter was formerly the General Manager of Cubana Group.

Obi Cubana‘s mum passed away in 2021. A lavish burial ceremony was organized to commemorate her demise. Many billionaires and socialites were in attendance at the burial, which was held in his ancestral hometown of Oba, in Anambra State.

Obi Cubana is formally hitched to Ebele Iyiegbu, an attorney and the founder of Kiek Foundation which is a non-legislative association which center is setting up quality instruction, human services, sustenance and kid’s correct administration to the less benefit.

The union is blessed with four (4) children.

The billionaire businessman Obi Cubana is the Chairman of Cubana Group and CEO of Ibiza Club.

He joined the exclusive list of Nigeria’s billionaires because of the success of his businesses.

Obi Cubana is estimated to have a net worth of US$300 million to US$500 million.

The Cubana Group is a famous brand that has rubbed off on its founder – Obi Cubana. Over the years, he has amassed millions of followers on social media.