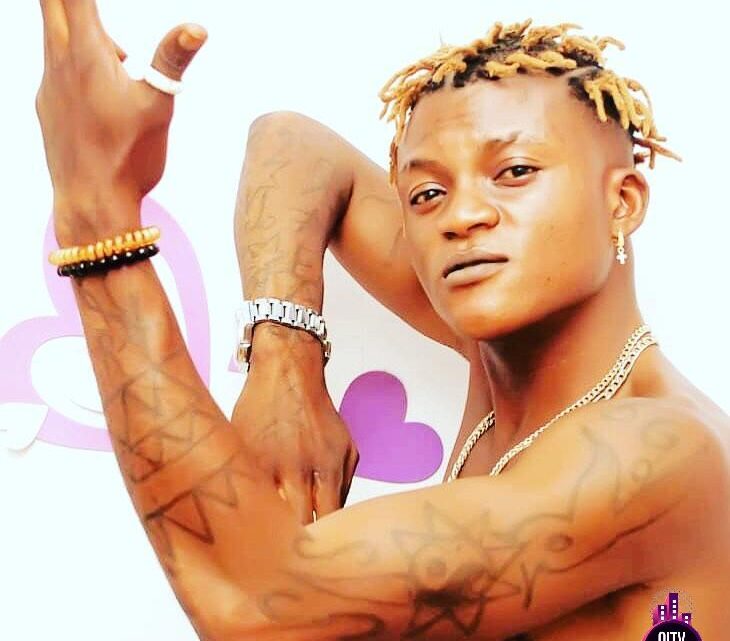 Habeeb Okikiola (born March 12, 1994) is the newest face in the Nigerian indigenous rap scene. The Yoruba-born rapper, singer and songwriter is known in the industry by the moniker, Portable Omolalomi.

Portable, who has been making music for some time now, struck gold recently when he teamed up with Poco Lee and Olamide on the hit single, Zazuu Zeh.

The song, which is topping the table of several music charts in the country, has thrust Portable into the limelight and made him be liked by lovers of indigenous rap in the country.

The self-styled Son Of Shaku Shaku, Street Problem, Portablebaeby, and Wahala Musician, has joined the league of fast-rising artists in the country.

Portable Omolalomi was born on the 12th of March 1994 in the ancient city of Abeokuta. A week after his birth, he was named Habeeb Okikiola. A native of Ogun State in southwest Nigeria, he was born to the Yoruba family of Mr. and Mrs. Okikiola.

Portable Omolalomi and his siblings were raised in Abeokuta city by their parents and adhered to the Muslim faith just like their father and mother. Growing up in Abeokuta meant that Portable Omolalomi became well versed in the Yoruba language from an early age, as it was the medium by which he communicated with his parents, friends in school and in the neighborhood, and extended family members.

While he was still in elementary school, he became influenced by rap songs by American artists such as Dr. Dre, Tupac Shakur, The Notorious B.I.G and Snoop Dogg, which he listened via his father’s audio cassette player. He admired these artists and started composing rap songs whenever he felt inspired to do so.

However, with the rise of indigenous rap artists like Lord Of Ajasa, Dagrin, Danny Young, Olamide, QDot, CDQ, he decided to switch to Yoruba rap, and he was motivated to become a professional musician.

Portable Omolalomi didn’t miss out on the opportunity of getting a good education while growing up.

His parents ensured that he was enrolled at top public schools in Abeokuta for his elementary and secondary school education.

However, he decided not to further his education in the university and opted for vocational education at a training institute.

Recognizing the fact that he had a better chance of succeeding in the industry if he was at the center of it, Portable Omolalomi decided to move his residence to Lagos State, the music capital of Africa.

While Portable Omolalomi was in Lagos, he sought out producers he could work with, as he composed new rap songs on a regular basis. However, he still maintained a 9-5 job as an artisan in the mainland part of Lagos to pay his bills.

Despite recording a couple of songs that did poorly commercially, Portable Omolalomi was undeterred in his dream of becoming an A-list artist in the industry. Fortune smiled on him recently when he had a chance meeting with his music idol, Olamide. It was an emotional moment for Portable, who burst into tears as he knelt down and held to Olamide‘s legs, sobbing continuously.

Luckily for Portable Omolalomi, Olamide was taken to his artistry and brought him on an ongoing collaborative project with dancer and recording artist, Poco Lee. The project birthed Zazuu Zeh‘s song, which became an instant hit. The song, which has gone viral in the industry due to its catchy lyrics and the phrase, Zazuu Zeh, has thrown Portable into the limelight.

Since Portable Omolalomi became famous after the song, he has received many requests for collaboration from leading artists in the industry.

Ever since Portable Omolalomi broke into the industry, his followership on social media has skyrocketed.

Currently, he has over 1 million followers on Instagram. His musical videos can be converted to mp3 with insta audio downloader because he’s used to dropping freestyle videos on his page. Due to this, there has been several remixes of his sound by DJs, producers and content creators which incorporates the likes of DJ YK beatz, Paul Cleverly and more.

Portable Omolalomi is 28 years old as of today. He resided in the Mainland part of Lagos before but recently moved to the island – Lekki. He lives in a spacious apartment in a high-rise neighborhood in Lekki.

Though he is yet to unveil her identity to the public, he is currently in a serious relationship with a beautiful young lady whose name is Opeyemi. Portable Omolalomi has two children, two boys from different mothers. He is not married and has no wife.

He visits Ogun State from time to time to see his parents and siblings.

Portable Omolalomi‘s success as a musician means that he constantly receives invitations to perform at music shows and concerts in the country. He also receives royalties when his fans stream or download his works online.