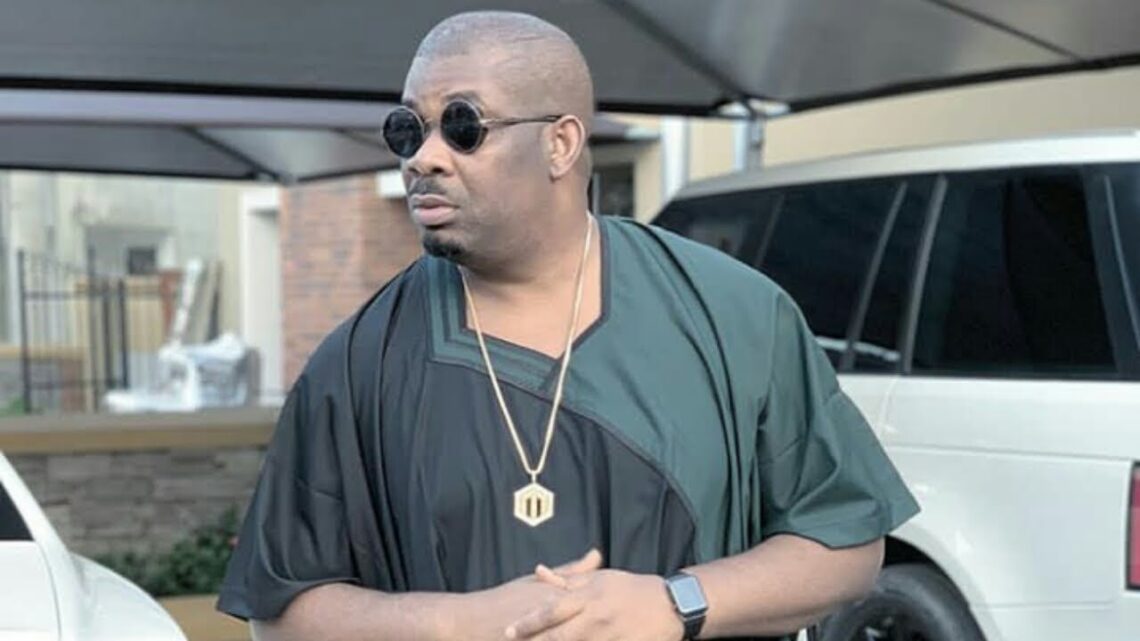 He gained prominence after producing albums, No Long Thing, and Rundown/Funk You Up. He has also worked with music artists such as D’Banj, Sauce Kid (Sinzu), Dr SID, Ikechukwu, Kween, D’Prince, Jay-Z, and Kanye West in a very illustrious career.

On the 3rd of April 2021, the Nigerian music producer sparked mixed reactions on social media after sharing a picture of his ex-wife, whom he got married to in 2001 while in London.

Michael Collins Ajereh a.k.a Don Jazzy was born in Unmuahia, Abia State, into the family of Mr. and Mrs. Collins Enebeli Ajereh on the 26th of November, 1982. His father was an indigene of the Isoko tribe in Delta State while his mother was an Igbo princess from Abia State.

Don Jazzy was raised with his brother Charles Enebeli (popularly called D’Prince), in Ajegunle, Lagos State, after his parents moved westward in the late 80s. At the time, he grew fond of music and soon learned how to play the bass guitar and piano instruments. He was also known for his skill in performing traditional and percussion instruments.

The award-winning music producer struggled as a toddler in the Ajegunle locale. It took him some years to adapt to life in the City, after moving from Abia State.

At the start of the millennium, Don Jazzy got the chance to travel overseas, after his uncle requested that he played the drums for a church in London. Eventually, he got a job as a security guard in McDonald’s and struck valuable alliances with music artists such as Solek, JJC, Kas, Jesse Jagz, The 419 Squad, and D’Banj.

Don Jazzy began and completed his primary education at Ajegunle, in Lagos State, before enrolling at Federal Government College, Lagos. While at school, he engaged himself with the school’s music club, making the most of his spare time.

Don Jazzy teamed up with music artiste, D’Banj to start Mo’ Hits Records in 2004. Together, they created a music brand that lasted almost a decade.

Under the music label, he produced albums, No Long Thing, and Rundown/Funk You Up. He became known for his famous line, It’s Don Jazzy Again!, which served as an introduction for songs in which he featured. Don Jazzy worked with Wande Coal, D’Prince, and Dr. SID, contributing to the production of landmark albums such as Wande Coal‘s Mushin 2 MoHits.

With vast experience in audio engineering and music production, he went on to feature in background vocals for D’Banj, Sauce Kid, Dr. SID, Ikechukwu, Kween, D’Prince, and Jay-Z, gaining International recognition after working as a producer at Very Good Beatz for Kanye West in 2011. He also worked with Jay-Z during that period. In March 2012, Don Jazzy and D’Banj decided to part ways, due to artistic differences.

On the 7th of May, 2012, Don Jazzy launched another record label, Mavin Records, and released an album starring all signed artists. Songs recorded under the album include; Amarachi, Oma Ga, Take Banana and Chocolate, YOLO, and then I’m a MAVIN anthem. The label also signed the talented music artiste, Tiwa Savage.

Mavin Records houses and was home to the following Nigerian musicians;

On the 3rd of April 2021, the Nigerian music producer, Don Jazzy sparked mixed reactions on social media after sharing a picture of his ex-wife, Michelle Jackson whom he got married to in 2001 while in London.

He also announced his intentions of getting a new girlfriend in December 2020, stating that he had a big crush on American music artist, Rihanna.

Don Jazzy is also a man of affluence. Earlier in the year, he shared a photo on Instagram of his newly acquired house worth 300 million naira in Lekki, Lagos State. He also owns an array of expensive cars namely;

He commands a large fan base on social media, with more than ten million followers on Instagram and over a million on his Facebook page.

Currently a leading icon in the entertainment industry, Don Jazzy is also renowned for his influence in the development of several music artists in Nigeria. According to recent findings, his net worth is estimated between $15,000,000-$20,000,000.