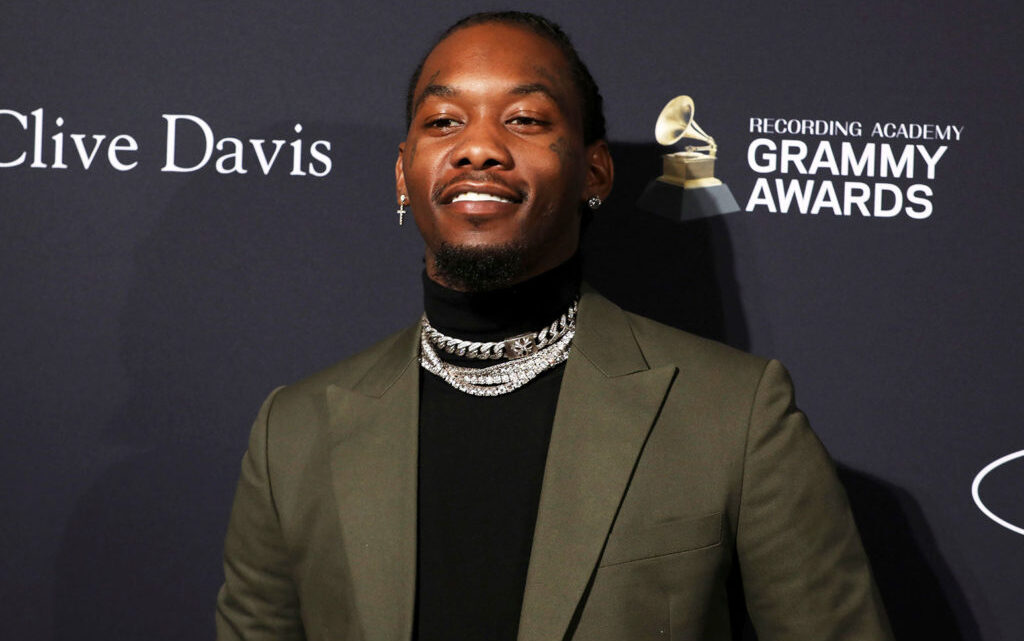 He is also a member of the Migos music group which also comprises Quavo and Takeoff; his cousin and nephew respectively.

The trio teamed up to form the very formidable rap group in 2008, promoting trap music with huge returns on streams and downloads on the internet.

On February 22, 2019, he put out his first solo album, Father of 4 featuring Cardi B on a track titled Clout.

He was also married previously to Cardi B in a union that lasted for a year. Offset‘s time in the spotlight has also been marred with sexual scandals as well as his incessant breaking of the law.

He was charged alongside his Migos group for possession of firearms and hard drugs many months back.

American Rapper; Offset, was born into the Cephus family on the 14th of December, 1991 at Lаwrеnсеvіllе, Gеоrgіа. He shared memorable moments of his childhood days with his siblings Quavo (known fully as Quavious Keyate Marshall) and Takeoff (known fully as Kirshnik Khari Ball). Together, they formed the Migos music group in 2008.

Prior to his shot at fame, Offset spent most of his early days at Gwinnett County, Georgia, alongside his cousin Quavo and nephew Takeoff. He was also known for his notoriety and juvenile issues.

At 22, Offset got incarcerated in Georgia’s DeKalb County Jail after he violated received probation for felony convictions for burglary and theft. He was also involved in multiple sex scandals and relationships both in High School and in recent times. Although Offset was raised in a middle-class family, his inherent rap skill alongside the support he received from family and friends enabled him to pursue a career in music.

Offset was not amongst the scholars of his set. Back in school, he was known as a ‘trap’ king, due to his style of rap. He received a basic education at his hometown in Lawrenceville, Georgia, but failed to attend College after graduating from High School.

It was during that period he took the decision to commit to rap music, starting off only aged eighteen. While at school, Offset had his large share of bane with justice. His persistent rule-breaking made him ‘do time’ for a brief spell.

Offset teamed up with his siblings, Quavo and Takeoff to form Migos music group in 2008. However, it wasn’t until 2013 when they released a single, Versace, did they gain global recognition.

Soon, their fan base sky-rocketed with many keen on the trap-group’s maiden album. Eventually, Migos released their debut album in 2015 called Yung Rich Nation. Their seemingly theatrical, swagged-up music videos also made them stand out, especially after releasing singles such as Bad and Boujee in 2017, which had huge engagements on social media that same year.

The song also topped the U.S Billboard chart, with the trio’s second album also making the top spot on the U.S Billboard 200 chart. Offset’s artistry and collaboration with other music artists such as Drake, Cardi B, 21 Savage, and Macklemore, also earned him accolades in the rap music industry, with high returns on stream and downloads on the internet.

On February 22, 2019, he put out his first solo album, Father of 4, featuring Cardi B on a track titled Clout.

Notable singles by Offset include;

He also got featured in popular tracks such as;

In 2016, the Migos trio starred in an episode of Donald Glover‘s series titled, Atlanta. Offset was also part of fashion campaigns for designers such as Gosha Rubchinskiy, Bryce Barnes, and Lavati. Recently, the trap artiste also invested in ESports Organization; FaZe Clan.

The Migos star boy got married to fellow rapper, Cardi B, on a private occasion held on the 20th of September, 2017. He decided to propose at a live performance held at Power 99’s Powerhouse in Philadelphia the following month.

However, their union lasted only a year, with Cardi B, announcing their break in December 2018, following Offset‘s infidelity issues.

Offset is also a father of four children, which he had with four different women; Jordan Cephus (with Justine Watson), Kody Cephus (with Oriel Jamie), Kalea Marie Cephus (with Shya L’Amour), and Kulture Kiari Cephus and Wave Set Cephus (with Cardi B).

Asides from his time with family, Offset has also been at ‘loggerheads’ with the Law. He alongside other members of Migos faced charges for possession of firearms and hard drugs many months back, with probation of five years handed out.

He got nominated alongside Cardi B in the Baewatch category at the BET Social Awards in 2018.

Offset was also nominated for a Grammy Award in 2020, in the Best Rap Performance category, for his song, Clout, featuring Cardi B.

Offset is amongst the top-tier trap artists in the United States. His music group, Migos, has also gained global recognition. With a net worth estimated between $26,000,000-$28,000,000, Offset is currently amongst a list of affluent rappers in the western world.