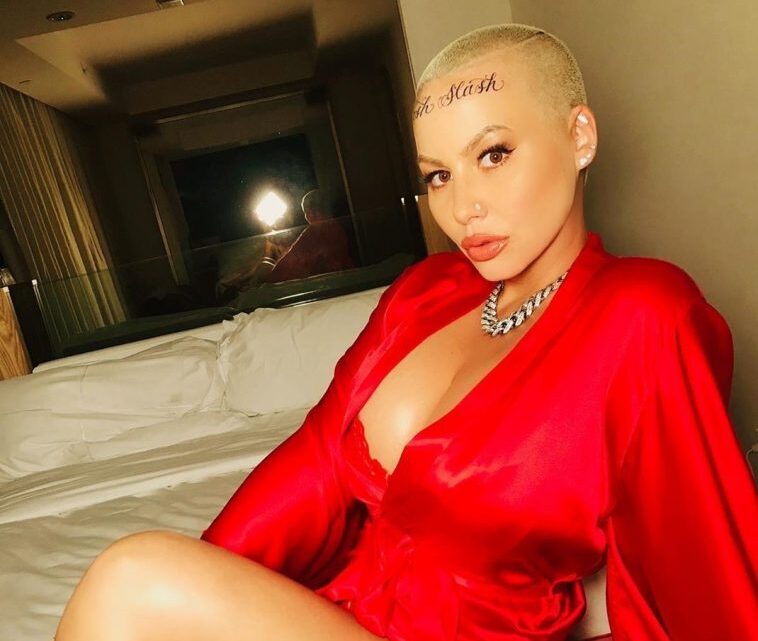 American actress and model Amber Rose Levonchuck (born 21 October 1983) is known for her work on the screen and in the media industry as a whole. She is a multifaceted actress, rapper, social/television personality and model.

She is one of Hollywood’s most colourful characters, and her life story is a sequence of actions that defy preconceptions.

As a model, Amber Rose first tried her hand at rapping before transitioning to acting.

She was born Amber Levonchuck in Philadelphia on October 21, 1983. She then took her mother’s surname, Rose.

She has a brother whose name is Antonio Hewlett. Her father is Michael Levonchuck while her mother is Dorothy Rose.

Amber Rose‘s also never been one to blindly follow social norms or play by the rules set down by others. To her fans, she revealed that she was bisexual.

During the breakup of Amber Rose and Kanye West in 2010, she accused Kim Kardashian of being a homewrecker and accused her of cheating on her. When Amber Rose stood up for herself, she gained a following on social media as a result of her bravery.

When Amber Rose split with Kanye West, she went on to date some other high-profile guys. Wiz Khalifa was her husband of two years. They had been married for 14 months when they decided to call it quits.

Their marriage was blessed with a son named Sebastian Taylor Thomaz. After her divorce with Wiz Khalifa, she went ahead to have a new boyfriend named Alexander Edwards. Alexander Edwards is a music business executive and her baby daddy. Rumor has it that she dated 21 Savage too.

Information about Amber Rose‘s education is not made available to the media.

Because of her family’s financial situation, Amber Rose had to begin her work at an early age. To start with, she supported herself by working as a stripper. She eventually made the transition to modelling and began earning jobs as a model.

In Ludacris‘ song “What Them Girls Like,” she made her on-screen debut in the music video. This was a significant moment in Amber Rose‘s career, and Kanye West became aware of her.

A Louis Vuitton print ad for Kanye West‘s footwear collection peaked her modelling career. They began dating and frequently appeared in public together.

Amber Rose continued to perform in music videos as her career progressed. Some of these videos are “Vacation” by Young Jeezy, “Massive Attack” by Nicki Minaj, “You Be Killin’ Em” by Fabolous and “No Sleep” by Wiz Khalifa.

At ‘New York Fashion Week‘, she walked the runway for designer Celestino.

When the reality show ‘Running Russell Simmons‘ premiered in 2010, Amber Rose made her on-screen debut. In addition, she served as a guest judge on the hit reality show “RuPaul’s Drag Race“. In ‘Master of the Mix‘, she became a full-time judge. To promote Smirnoff‘s new vodka flavours, including “Whipped Cream” and “Fluffed Marshmallow,” she became the face of the business in 2011.

As a rapper, Amber Rose is no slouch, either. In 2012, she released her first single, ‘Fame‘, with Wiz Khalifa. In the same year, she released “Loaded“, her second single.

In 2009, Amber Rose launched an eyewear brand to launch her fashion design career. Other trendy products, such as bags, apparel and jewelry, were added to her range. As a writer, she’s released a book called ‘How to Be a Bad Bitch.’

Because of her super-hot figure and openness about herself, successful music business titans may have fallen in love with her.

If you are a regular follower of the American modeling industry, you would have come across one of the most successful model who happens to be Amber Rose. She has clapped an estimated net worth which is danced around US$12 million.