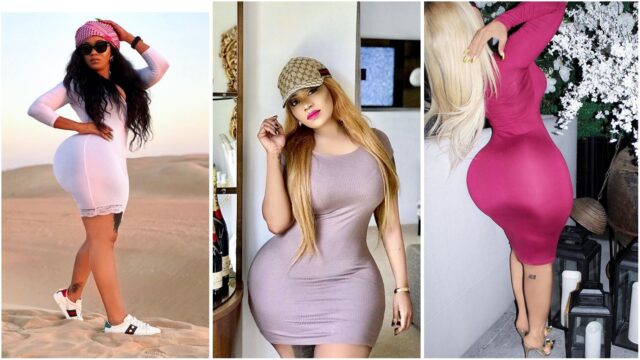 The gorgeous lady who wears many hats is from Kenya. She is a model, video vixen, social media star, and entrepreneur.

She ascended the steps of fame after she was featured in the music video of P-Unit‘s single, You Guy.

The song which was released in 2012 gave Vera the opportunity to grow in the modeling world as other music video directors began using her in their videos.

She is a popular figure on social media due to some of her controversial statements and ravishing beauty.

Vera Sidika was born to the Mung’asia family on the 30th of September 1989. She was raised in a rural town in the coastal city of Mombasa by her parents. Her names Vera and Sidika mean faith and friendship respectively.

Though she was born into a middle-class family, Vera aspired to be in the media industry from a young age. She always told herself that she was a shining star, who was meant for great things.

As a child, she usually emerged the winner of dancing competitions organized in her community. She continued to improve on her dancing prowess as she advanced in age.

Blessed with a plus-size body, she took advantage of this to pursue a career as a plus-size model. She was barely seventeen when she joined the field and began competing in contests and attending fashion shows in her city of residence. She has a sibling whose name is David Mungasia.

She studied at Kenyatta University, Nairobi for her higher education.

Though Mombasa was the second-largest city in Kenya, it was surpassed by Nairobi when it comes to entertainment. This was one of the two reasons that prompted Vera Sidika to move down to Nairobi. The second one was for academic purposes.

In Nairobi, she began looking for opportunities to grow her career by auditioning for modeling roles. She finally got her chance when she appeared in the music video of the song, You Guy. The role shot her into the national limelight and other industry players began to call her for jobs. In 2014, she appeared in the hit song, My Gal, by Prezzo.

As a video vixen, she has appeared in scores of videos in the past nine years. She has moved from being a national star to a continental star, as she worked with Nigerian artists Harrysong, Kcee, and Skiibii on their song, Ebaeno. Her work has also been seen internationally as she has been featured on top publications like The New York Post and BBC Africa.

Vera Sidika is a successful entrepreneur. She launched her brand, Veetox Tea (an herbal detox product) in May 2020. Since its release, the product has been sold to thousands of customers across the world, helping them to burn belly fat. She is the CEO of VS Spa, a beauty, cosmetic, and personal care brand based in her home city, Mombasa. She recently set up a skincare company called Zuri Glow Skincare. The brand offers its services to clients in Nairobi.

In 2015, she and some other Kenyan celebrities starred in a reality TV show, Nairobi Diaries. The series showcased the day-to-day life of successful women. Notable names that participated in the show are Silvia Njoki, Ella Ciru, Pendo, and Gertrude Murunga. She recorded another worthy achievement in 2015 when she won the Best Video Vixen award at the Pulse Music Video Awards.

Some of Vera Sidika‘s statements have gone viral because of their controversial nature. She has also achieved fame for posting sexy pictures on her Instagram page. She doesn’t shy away from flaunty her big boobs, hips, and butt on social media.

Vera Sidika is the winner of the 2015 Pulse Music Video Awards.

Vera Sidika is one of Kenya’s biggest social media personalities. She has over 2m followers on Instagram and over 7.5k followers on Twitter.

Vera Sidika celebrated her thirtieth birthday in a grand style on the 30th of September 2019. The event was graced by many dignitaries in the Kenyan entertainment industry, who came to celebrate with one of their own.

Vera Sidika is happily married to singer, Brown Mauzo. The couple had exchanged vows on the 19th of October 2020 in a private ceremony attended by family members and close friends. She currently resides in Mombasa.

Before her marriage to Brown Mauzo, she had been in a serious relationship with Tanzania singer, Jimmy Chansa, for a couple of years. The duo had broken things off when they no longer had feelings for each other.

She traveled down to the UK in 2014 to lighten her skin. The procedure was a successful one and made her look more beautiful. An avid traveler, Vera Sidika has visited many cities in the world, as she lives a luxurious life. She maintains a height of 5 feet 4 inches.

Vera Sidika is able to afford her lavish lifestyle because of her different streams of income. At the moment, she has an estimated net worth of $400,000-$800,000.