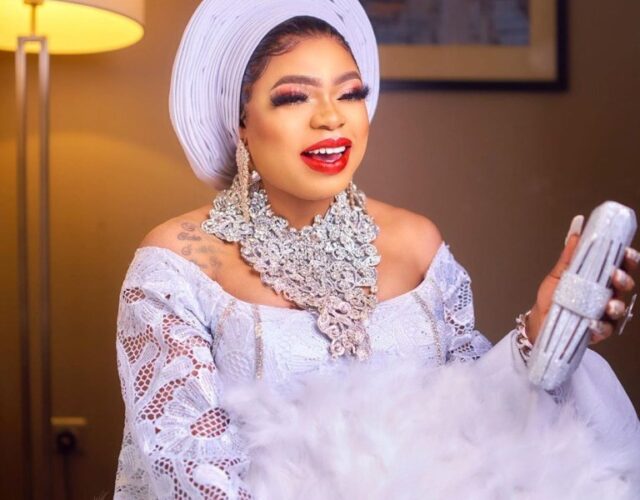 With Nigeria being a country with no LGBT (Lesbian, Gay, Bisexual, and Transgender) rights.

He is from Ogun State, who now resides in Lekki, Lagos.

He deals in whitening cream and plans to be a big competition of Dencia Whitenicious.

Bobrisky is also known for her presence on social media, primarily on app Snapchat and Instagram.

The Nigerian male Barbie, Bobrisky grew up in an ordinary average polygamous family.

His father is married to three wives, and the celebrity is the youngest child.

Bobrisky was born and raised in a Muslim home, but unlike his parents, he chooses to be a Christian through the church he attends is not known to the public.

Bobrisky started fending for himself when he turned 16, and as a child, his mother repeatedly beat him for his feminine inclinations.

Still, he eventually turns out to become known for this controversial personality. He became famous in on-campus colleges for his unique sense of fashion.

Bobrisky would apply modest facial makeup in his university years, wear women’s attire, and deceived men in clubs and bars but always declined when an admirer expressed a desire for intimacy.

During his program at UNILAG, he was known to be a very talented makeup artist.

The Lagos State Police Command once arrested him at Lekki shortly after publicly announcing he is gay.

Although his apprehension points towards publicly identifying as homosexual, Bobrisky claimed he was arrested following a petition written against him by rival and entrepreneur, Toyin Lawani.

Some Nigerian celebrities, homosexuals, and cross-dressers were in attendance, but the party was crashed and shut down by the police force. When the Police shut down the event, he decided to leave the country.

Before turning her skin into “Yellow Pawpaw,” Okuneye Idris Olarenwaju, aka Bobrisky, had his secondary school education at King’s College in Lagos State, where he obtained his first school leaving certificate and West Africa Senior School Certificate.

after which he proceeded to the Prestigious University Of Lagos, Where he graduated with Bachelor Degree in accounting.

Bobrisky started his career while he was In the university. He was once a choreographer.
He taught people dances and earned money. He also attended various dance events. He received the title of Best Dressed Male at his faculty and the University of Lagos and soon became the campus star.

Bobrisky started his first business by opening up a beauty shop located in Ikeja Lagos. He also capitalised on his sense of fashion and got involved in buying and selling clothes.

He ventured full time into the world of beauty therapy & makeup art. Part of his business strategy was to dress unusually to attract mostly female customers to his store. Bobrisky became more famous through her Snapchat account, where she shared numerous controversial and trending videos.

Due to his highly controversial nature, especially on social media, Bobrisky could gather traffic to his Snapchat account. Nonetheless, she has revealed that she makes money in a couple of ways.

Which include selling ‘Bobrisky Bleaching Cream’ which costs $400, making short video clips, selling clothes in her boutique, serving as a brand ambassador to multi-million companies and hosting occasions.

Taiwo Kola-Ogunlade, of Google’s Communications and Public Affairs Manager, Anglophone West Africa, disclosed Bobrisky was the most searched individual from October 26 to November 2016.

Bobrisky grew up in a polygamous home as his father had three wives, and he was the last born of his late mother. He has shared a photo of himself and his mother, and fans expressed shock at the older woman’s beauty.

His mother is fair in complexion and looks utterly supportive of her son’s beauty business. He was an excellent friend with Tonto Dikeh.

We cannot be able to disclose their relationship because it has not yet been verified. He is not yet married.

Before his complexion transformation, the Snapchat celebrity’s skin colour was just as dark as most Nigerians until he suddenly turns snow white. He does not care about the rumours about his sexuality or waste time firing back at critics and once posted on his Facebook page that she is counting his millions and helping people, paying her tithes to the Lord.

She is magnificent. His fans are wanting to find out who the lover is. His mystery lover, who he claims is Africa’s fourth-richest man, gave him N7 million and a Benz.

The mystery lover also plans to get Bobrisky a house next to Linda Ikeji at Banana Island.

Bobrisky is well known to chat dirty and post raunchy kinds of stuff. Nevertheless, his fans love him all the same. He is in his mid-twenties and gay.

Bobrisky have millions of followers on social media.

Bobrisky is currently one of the richest and the most influential Beauty therapists in Nigeria, with an estimated net worth of $3.125 Million.