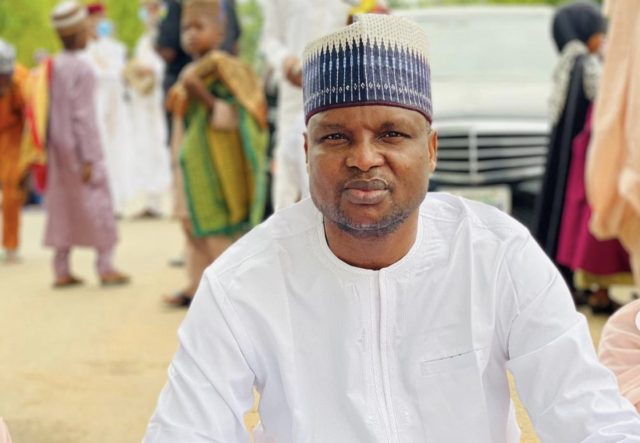 Fearless, Super-Cop, or whatever you choose to call him, doesn’t change Abba Kyari is an experienced police officer.

Through his hard work, many criminal cases in Nigeria have been solved.

Abba Kyari is known for his doggedness in solving crime cases and bursting criminals.

He is also the Deputy Commissioner of Police (DCP), who over time has risen to prominence through his successful gallantry actions combating crime in the country as Officer in charge of the Reformed and disbanded Special Anti-Robbery Squad (SARS) for five years.

Abba Kyari is also a member of the International Association of Chiefs of Police (IACP).

His quality of being Tender at heart, good upbringing, hospitable and charitable nature has been his infallible proof to the Hallmark.

Abba Kyari hails from the North-eastern part of Nigeria, Yobe State, to be precise.

He is from the linage of the Kanuris, from the Gujba local government area of Yobe State.

He is a Muslim and was born to a polygamous family and the eldest son of thirty siblings.

Born on 17 March 1975, the Nigerian Abba Kyari grew up with his parent in Maiduguri, Borno State, Nigeria.

He grew up in a rather challenging environment with many challenges, which was a significant builder to his fearless attitude at the police force today.

Abba Kyari was a beneficiary of free education sponsored by the Maiduguri government back in 1978.

He completed his primary and secondary education in Maiduguri before gaining admission to the University of Maiduguri.

At the University, he studied a course in Geography, becoming a graduate in 1997.

He applied for the compulsory National Youth Service Commission (NYSC) in 1997 and was posted to South-south Nigeria, Akwa-Ibom precisely and completed the Youth program in 1998.

Abba Kyari didn’t just stop there. He joined the police academy in Wudil Kano state Nigeria where he successfully graduated as a cadet Assistant Superintendent of Police (ASP) in 2001.

Ordinarily, Abba Kyari could quickly become a scientist after graduating with a degree in geography, but the young Nigerian opted to become a police officer. After graduating from the police academy in Wudil Kano state, Abba Kyari was posted to Adamawa state.

He did his service at a local government known as Song, Girei, and Numan LGA and was exceptional in solving crime cases.

Abba Kyari was on song when he burst and led the arrest of one of the notorious kidnappers in Adamawa, popularly called Spirit (Nagi). Spirit terrorized Numan, a town in Adamawa, for over three years before his capture and successful arrest. He basked on this success and went on to achieve more.

To gain more experience in the field, Abba Kyari joined the Police Mobile Force (MOPOL) in 2005 and was in service for five years before he was posted to Lagos Police Command in 2010.

Later, he was promoted to the second in command (2/IC) to Special Anti-Robbery Squad (SARS). He became the Operational Commander (OC) For the latter to be disbanded SARS on January 15, 2011.

His success in the service of policing saw him appointed as the Deputy Commissioner of Police in 2018. He also doubles as the Nigerian Intelligence Response Team.

The highlight of his career as a police officer include the successful arrest of Umar Abdulmalik, the most wanted Boko-Haram Commander, together with 8 of his members.

Abba Kyari was also responsible for the arresting of the most notorious kidnapper in the history of Nigeria, Henry Chibueze, AKA Vampire, and his Kingpins, among other notable arrests.

The lowlight of his career was when he was accused of accepting a bribe from alleged fraudster, Hushpuppi, by the Federal Bureau of Investigation (FBI) on 28 July 2021.

Abba Kyari does not let his career get in the way of his social life.

He is very active on Facebook and Instagram, posting pictures of him, his friends, and his family very often.

He has over 73k active followers on Instagram. He mostly posts updates about his arrest and opinions on Facebook.

Despite being a police officer, Abba Kyari sure knows how to party. He was captured at the recently concluded burial of the mother of famous businessman, Obi Cubana.

There are also pictures of him with DMW boss David Adeleke also known as Davido.

Abba Kyari, who grew into fame and became prominent from most especially the #Endsars protest in Lagos, has so many accolades and prestigious awards to his name but is not fortunate enough to have been involved in Hushpuppi‘s fraud case as Alleged.

These led to his suspension by the Nigerian police commission.

DCP Abba Kyari is one of the most Influential Police Officers in the Nigerian police force. His net worth is estimated at $1,400,000.

He has two landed properties with a few cars.