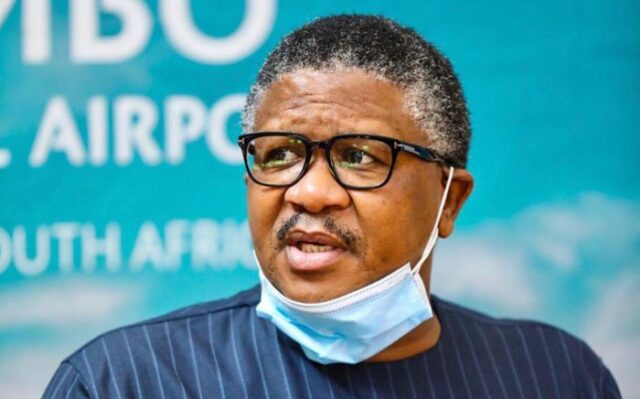 Fikile Mbalula (born 8th of April 1971) is one of the longest-serving South African politicians.

He is currently serving as the South African Minister of Transport and had held the position since May 2019.

He is actively involved in the political matters of South Africa and he is a member of the African National Congress.

Fikile Mbalula was born on the 8th day of April in 1971 in a small town, Botshabelo in Free State, South Africa.

He was not born with a silver spoon and his parents tried and made sure they supported his dreams.

He witnessed Apartheid in South Africa and it was his motivation for pursuing a career in leadership.

Fikile Mbalula started out his political career as the public secretary and Vice president before becoming the president of the Youth Congress of Botshabelo (his hometown) in 1988.

The South African government has a cabinet reshuffle in 2017 and he was appointed to serve in the capacity of the Minister of Police. He is currently the Minister of Transport, a position he has held since 2019 after being appointed by President Cyril Ramaphosa after the South African general elections. It is important to note that he is an active member of the African National Congress.

Fikile Mbalula is married. His wife is Nozuko Mbalula a South African royal princess. He jokes about how hard it was for him to woo her. He is happily married with children. He is very private about his children.

He has been involved in several scandals the most recent being the trip he had with his family in 2017. According to the investigators, Fikile Mbalula used the South African government funds to sponsor the trip and expenses incurred.

Fikile Mbalula is very active on social media. He uses his account to make comments, mostly controversial about National events.