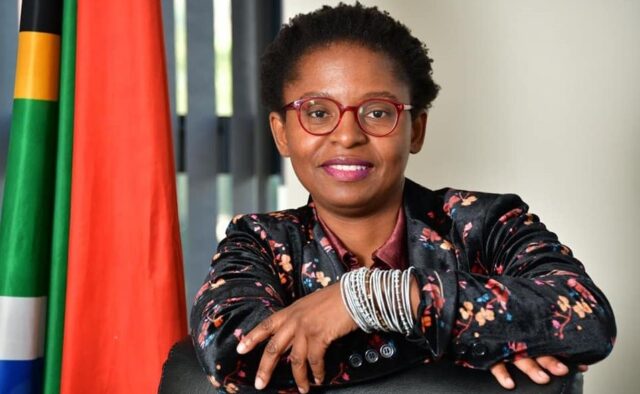 She is the current Minister of Small Business Development and a member of the parliament of the National Assembly of South Africa.

She is a member of the South African political party African National Congress.

She is an alumnus of Bradford University, United Kingdom, and Rand Afrikaans University.

Khumbudzo Ntshavheni was born on the 30th day of January in 1977.

She was born and raised in a modest family, her mother worked in the Taxi business, and get father owned a store.

She was born in the native town of Sibasa in the Transvaal Province of South Africa. At the age of 14, she convinced President Nelson Mandela to embrace 16 years as the voting age of South Africa during the CODESA negotiations.

She graduated from Mbilwi Secondary School and obtained an MBA degree from Bradford University in the United Kingdom in 2008. She obtained a degree in Labor Relations and Development Studies from Rand Afrikaans University.

Khumbudzo Ntshavheni started out as the Municipal Manager of the Ba-Phalaborwa Local Municipality in the Limpopo area of South Africa from 2008 to 2010. She also served as the Tourism Manager at Trade and Investment Limpopo, Chief Information Officer for the Limpopo Provincial Department of Local Government and Housing, and Spokesperson for the Premier of Limpopo.

She had a short stint in lecturing. She was a lecturer at the University of South Africa before serving as the Chief Operating Officer at the State Information Technology Agency (SITA). She was appointed to the Board of Denel by Public Enterprises Minister, Lynne Brown to serve in the role of non-executive director of the organization.

She is a member of the African National Congress Youth League‘s National Executive Committee (NEC). As a result of her love and interest in South African youths, she is actively involved in many activities and programs aimed at improving the interests and lives of South African youths.

After she won the election to the National Assembly in May 2019, President Cyril Ramaphosa appointed her to the post of Minister of Small Business Development. As a result of the unfortunate death of Jackson Mthembu; the South African Minister of Planning, Monitoring, and Evaluation in January 2021, Khumbudzo Ntshavheni was appointed by President Cyril Ramaphosa as his acting successor.

Khumbudzo Ntshavheni is active on Twitter @MizKhu. She has over 129,000 followers. She posts updates regularly.

Khumbudzo Ntshavheni is very private about her personal life. She is not married and it is not known whether she has any children or not.