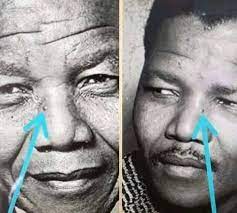 Makhanda Gibson Makanda was believed by some South Africans to be the fake Nelson Mandela who replaced him after his death in a protest against Apartheid in South Africa.

Another set of people believed that the real Nelson Mandela died during his stay in prison ( house arrest) in Robben Island during the 1980s.

South Africans believe that Gibson Makanda was the clone that replaced Nelson Mandela and the ‘Gibson Makanda‘ was the person who negotiated the new era of South Africa from an Apartheid form of Government to A full democracy where everyone of any color can contest in a general election.

Reason for this conspiracy theory

People claim that the military and paramilitary responded with little respect for human lives against protesters that stood against Apartheid in South Africa. They used wild dogs, guns, tear gases, and other dangerous means to subdue protesters.

As a result this set of people that believes in this conspiracy see the very high possibility that Nelson Mandela must have been killed during a protest and that the South African government responded by giving them a clone to prevent another protest and march as a result of killing their beloved leader.

Another set of South Africans believe that Makhanda Gibson Makanda replacing Nelson Mandela was what led to the divorce of Nelson Mandela and Winnie Mandela immediately after his release from Robben Island. They claim that Winnie would have found out immediately and to prevent that he divorced her as soon as he came out of prison.

The next reason is the celebration of sixty-seven minutes by South Africans on the 18th of June every year. Some set of South Africans believe that the reason for this celebration is a homage and respect to the real Nelson Mandela who died on Robben Island at the age of 67.

The most recent reason came along around 2018 when the popular Android app called Face App was released. This application could distort the faces of users showing them what they would look like in the nearest future (old age effect). A Twitter user @Jether_Calypso made use of a young available picture of Nelson Mandela and worked on it, using the old age effect and the results looked different from the image of Nelson Mandela in his recent years before death.

His posts were captioned ‘It wasn’t him and met with a lot of mixed reactions from the public and South African Twitter users.

Response to the Conspiracy Theory

Nelson Mandela‘s family released a statement stating that this conspiracy theory using Makhanda Gibson Makanda is a farce. Zindzi Mandela was involved in a series of online arguments in which she debunked the lie.