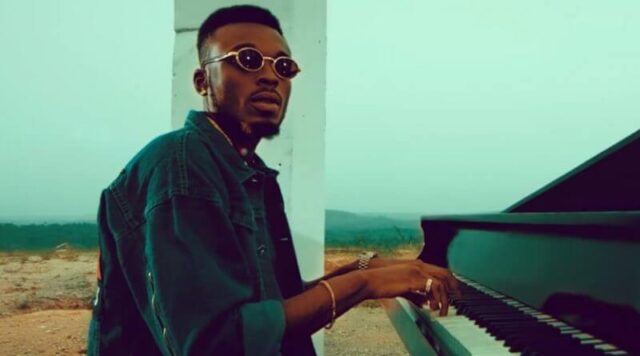 He goes by the stage name, Fresh VDM. The acronym, VDM stands for Very Disturbing Music.

He is the brain behind Davido‘s hit single, FIA. He is currently signed to Davido Music Worldwide label as their in-house producer.

Fresh VDM was born to the family of Mr. and Mrs. Bello in 1992. He was born in Togo, a West African nation.

He is a Nigerian who hails from one of the southwest states.

He lived in Lome, Togo during his childhood before moving back to his fatherland as a teenager.

He comes from a devout Christian household. This is because his parents are Pastors who run their own ministry.

As a young child, Fresh VDM became interested in music, albeit not as a singer. He was much more interested in playing instruments. He joined the choir as a drummer and soon learned how to play the piano.

Fresh VDM completed his primary school education in Togo. While he obtained his West African School Certificate from a top private secondary school in Lagos City.

After completing his high school education, he enrolled at Afe Babalola University, Ado Ekiti to study for a degree in Criminology.

While he was in the university, Fresh VDM became interested in music production and started learning the craft. In a short while, he became a very skilled producer and started making beats for upcoming artists in his school.

Months after, Fresh VDM became acquainted with Dremo, who was signed with APG Records at that time. Fresh started producing beats for Dremo.

In 2016, when Dremo was signed by Davido to his newly formed label, DMW, Fresh VDM followed him.

It was Fresh who produced the label’s first single, Back To Back in 2016. The song featured Davido, Mayorkun, Dremo, and Ichaba.

Fresh is also responsible for producing the song, Love You Tire By Mayorkun. Mr Eazi was also featured on the track.

In 2017, Fresh achieved international fame when he produced the beats of Davido‘s hit single, FIA. The song trended on major music charts around the globe for several months. It also has over 81 million views on YouTube.

He worked with Davido on his second studio album, A Good Time, in 2019. He also collaborated with Mayorkun on his debut album, Mayor Of Lagos.

The year 2020 saw Fresh achieve more success when he produced the song, The Best. The single is one of the tracks in Davido‘s A Better Time Album.

He is unarguably one of the biggest producers in Africa. He has worked with many leading names in the music industry such as Mayorkun, Peruzzi, Yonda, Burna Boy, DJ Ecool, Danagog, Ichaba, Dotman, Dremo, Cassper Nyovest, and Davido.

His official Instagram page is @fresh_vdm. He has over 92.1k followers on the platform.

Fresh VDM is a very tall, slender, and handsome artist. He clocked 30 years old on the 1st of February.

His friends and family members hosted a private birthday party to celebrate the day for him.

He resides in a lovely apartment building in Lekki, Lagos.

He has a twin sister who works in the corporate sector. He is currently in a serious relationship with a beautiful young lady but is not married. But he hasn’t shared pictures of the lady on his social media pages, so her identity is unknown.

The award-winning Nigerian record producer, Fresh VDM is estimated to have a net worth of $100,000-$500,000 in liquid cash and assets.