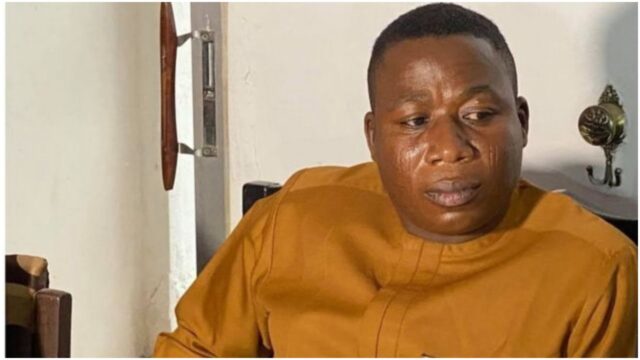 He was born in a small town known as Oke-Ogun which is stylishly situated in Oyo State, Nigeria.

He is a Nigerian business magnate, activist, and philanthropist. He became a social concerned for being the forefront agitator for the Yoruba Nation.

Sunday Igboho has taken to the street of most of the southwestern states in Nigeria to protest demanding for Separation of the Yoruba section of Nigeria.

On the 20th of July, 2021, the same year he took the agitation to the streets of the states, he was said to have been arrested in Cotonou after being declared wanted by Nigerian President, Muhammadu Buhari.

Prior to his arrest, Sunday Igboho was declared wanted by DSS the same month he was arrested for resisting DSS arrest after the fatal gun battle which led to the killing of one and one injury sustained by a DSS official.

His father relocated to Modakeke in Osun state, where he grew up.

He started off as a motorcycle repairer and then ventured into automobiles where he sells cars and was able to start Adeson Business Concept.

Sunday Igboho gained international attention after the part he played in the Modakeke/Ife war between 1997 and 1998, where he was a defendant of Modakeke.

Chief Sunday Igboho’s career started from being a mechanic and a motorcycle repairer. Over the years, God lifted him into one of the most successful businessmen around. He presently owns a company, Adeson International Business Concept Ltd., and has also established businesses in different parts of the world.

Sunday Igboho is also a human rights activist and politician. He earlier announced his intentions of running for the Oyo State governorship elections but insisted on not revealing his party until when overdue.

On January 26, 2021, some faceless hoodlums attack the Soka residence of Sunday Igboho for Ibadan and burn his house.

February 26, 2021, ‘kasala burst’ along Lagos-Ibadan expressway on Friday as police and Department of State Services allegedly try to arrest the Yoruba activist.

However, his recent action to send the Fulani community packing from the southwestern part of the country because of their perceived involvement in killings, kidnapping, and communal riot due to cattle encroaching into farms and destroying their farm produce.

For this action, Sunday Igboho is described as the Akoni Oodua of Yoruba land, because he is believed to be fighting for the right of the Yorubas.

Sunday Igboho was inspired to join politics right from when he was in Modakeke, however, in 2002, he joined politics fully when he moved to Ibadan, Oyo State when he met with Lam Adesina, former Oyo State Governor through a courageous step while trying to defend the rights of a senior citizen and other people at a fuel station.

It didn’t stop there, Sunday Igboho further went on to work with former Governor, Rasheed Ladoja and soon rose up to be one of his most trusted aides.

The famous, influential freedom fighter, Sunday Igboho had one of the most active social media pages in the world. He has over 1million followers on Twitter.

Sunday Igboho is a Christian, he also has a belief In Ifa, the religion of Yoruba Land and Oodua.

He’s married to two wives and has children including three professional footballers playing in Germany.

Sunday Igboho has 21 siblings, brothers, and sisters, not much is being said about his educational background but he is a very exposed person and can relate even in the English language though not so fluent.